In this project we define Arctic extreme seasons in the ERA5 data set, using seasonal anomalies of several surface parameters, and analyze their dynamical substructure and driving processes.

We identify Arctic extreme seasons objectively by using a multi-variate method which combines the seasonal anomalies of different surface parameters, including surface temperature, precipitation, surface heat fluxes, and surface radiation. Thus, we do not simply choose the hottest or wettest season, but also consider seasons which arise from an unusual combination of seasonal anomalies. As regional differences in the surface conditions can have a strong impact on the variability of the surface parameters, we analyze sub-regions with climatologically high, mixed or low sea ice cover separately.

A detailed analysis of extreme Arctic winters does reveal a high variability in their substructure and driving synoptic processes. While some seasons show strongly anomalous seasonal-mean values mainly in one parameter, others are characterized by a combination of very unusual seasonal conditions in terms of temperature, precipitation, and the surface energy balance components. Recurrent synoptic events such as cyclones, blocking and cold air outbreak episodes can strongly influence an entire season, depending on their location relative to the considered region.

For example, two extreme winters in the Kara and Barents Seas are analyzed which show very different characteristics due to contrasting synoptic conditions (see Figures below). Winter 2011/12 was characterized by constantly above-average temperatures during the season which can be related to the frequent advection of warm air favored by a sequence of quasi-stationary cyclones in the Barents Sea. The strong warm anomaly was further maintained by an enhanced frequency of blocking anticyclones and a reduced frequency of cold air outbreaks in the Kara and Barents Seas. In contrast, winter 2016/17 started with a strongly reduced sea ice coverage and enhanced sea surface temperatures in the same region. This surface preconditioning, together with increased frequencies of cold air outbreaks and cyclones, was responsible for large upward surface flux anomalies and strongly increased precipitation, causing the season to be extreme. 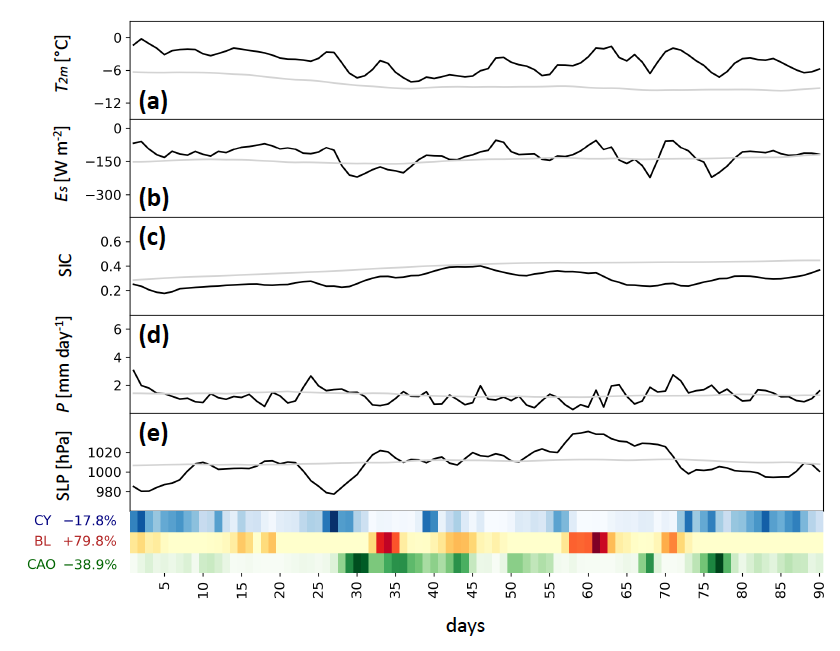 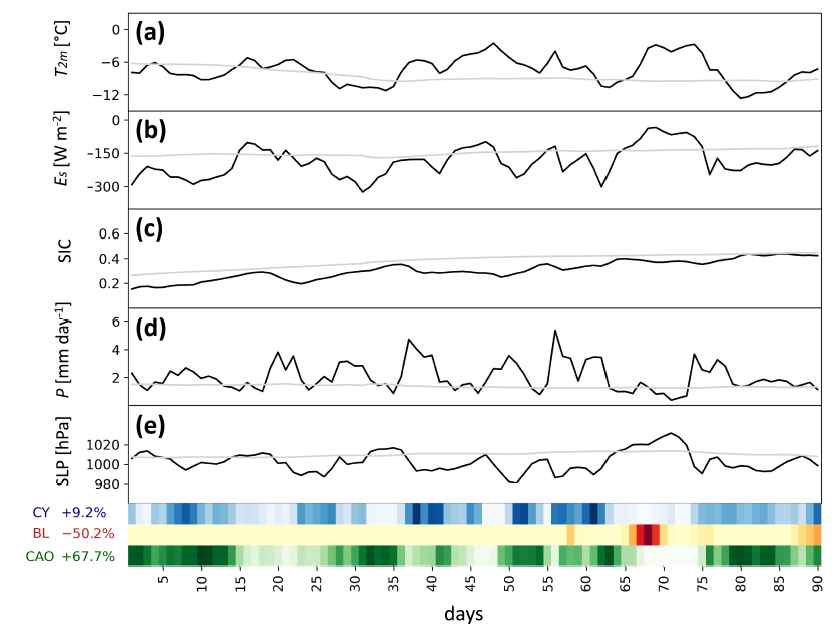 Time series of daily mean (a) 2 m temperature, (b) heat + radiative fluxes, (c) sea ice concentration, (d) precipitation and (e) sea-level pressure averaged in the region of the Kara and Barents Seas (black lines) in DJF 2011/12 (left figure) and DJF 2016/17 (right figure). A transient climatology is shown by grey lines. Blue, orange and green heatmaps at the bottom of the figure show the daily-mean coverage of the region by cyclones, blocks, and cold air outbreaks, respectively (the darker the color the higher the coverage). Relative frequency anomalies of the three weather systems are given in percentages. The horizontal axis indicates days since the start of the season with day 1 corresponding to 01 December. 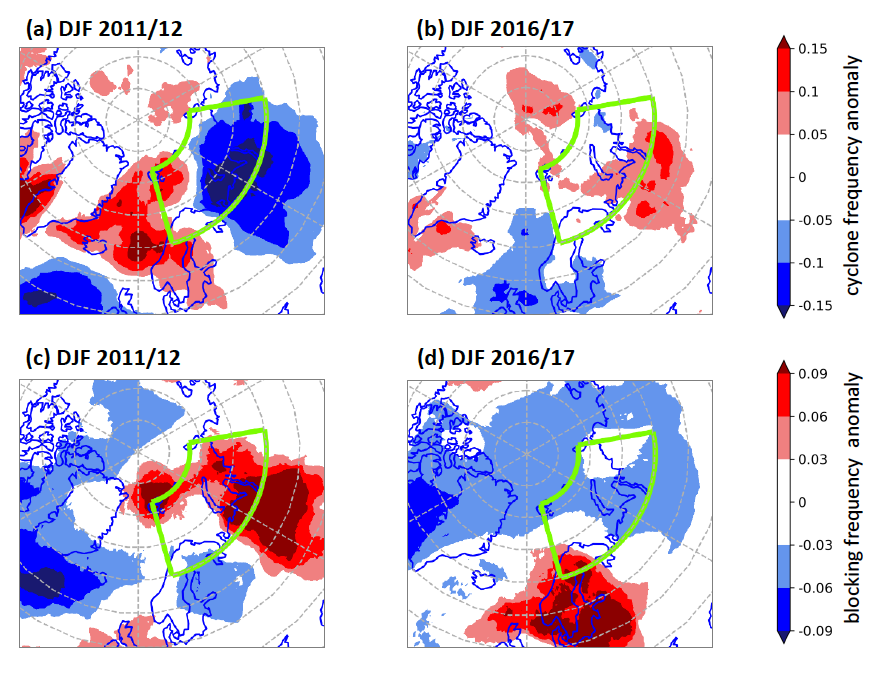